Done is the Engine of More 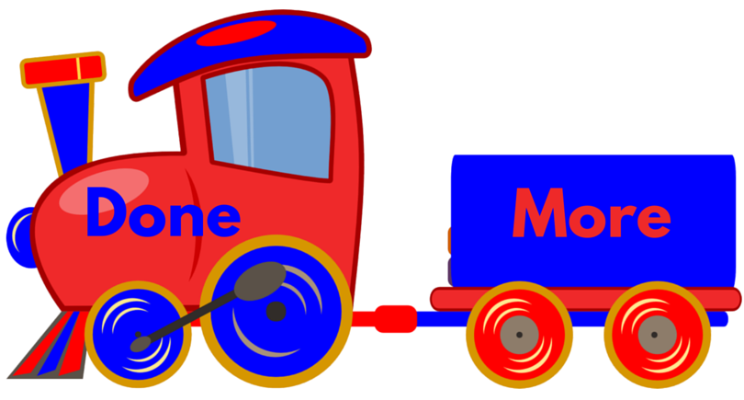 Done is the Engine of More – How to use Micro & Nano Goals to Get More Done!

You’ve tasted this Power Before

Think back to when you got something done and had a burst of energy to get more done. Getting started is hard but finishing is fun. When I complete a short to-do list for the day I’m energized to get more done, to add to the accomplishments of the day. People love progress and completing things. Today I want to share two ways to ignite this power of done: Micro and Nano Goals. They will help you GSD! (Get Stuff Done)

The key to this whole process is to get to done and bypass perfection, procrastination, and inactivity! Do whatever it takes to get something completed because that leads to accomplishment and getting more done! Micro and Nano goals can help you do that.
What often stops us is fear, overwhelm and not enough time. Let’s look at each of these for a moment. There’s that little voice in your head that says you can’t do that, it’s too hard, you’re not good enough or you don’t have enough time. The use of Micro and Nano goals will silence those voices. Sometimes your goal or what you have defined as “Done” is too big and overwhelming – Micro goals take care of that one by forcing you to chunk it “down to the doable”. What often stops people the most is not enough time. You think you don’t have enough time to get the thing done so you put it off and it never gets to done. Nano goals ensure that will never happen to you again.

A Micro goal is a goal that can be accomplished in just one day. They key is to make sure you have chunked it “Down to the Doable” so you can complete it in one day. Think about what you would like to accomplish and then figure out what you can get done today on it. Once you finish that, you will be more motivated to move forward on to other parts of the goal or project.

An example of a Micro goal you might have is “I’m going to call customers today.” Now that’s not a good goal because it’s not clear enough. A better one would be, “I’m going to call 10 customers today.” Now, it’s a little bit more specific. Next you ask yourself is that something I can do today? You want to bring it down to a daily doable size. What is the daily doable size? It may be something like three customer calls. I’d rather say that I’m going to make three, and then end up making five. Rather than saying I’m going to make ten calls and only make five because the feeling is different. Instead of the engine of more I’ve got the disappointment of failing to finish. The event is the same—I made five calls. But if I said I’m going to do ten, and I only make five, I’m beating myself up.  If I said I was only going to do three calls, and I made five, wow, I almost made double the calls I said I was going to do! The engine of MORE is at work. Chuck it down to the daily doable and you will find more energy and more done happening.

With a Nano Goal there’s no Resistance – no Head Trash

A way to get to done instantly is with Nano goals. This is one of my favorite concepts because it’s not talked about very much. It’s something that you can use for yourself, for your business, and with your family and friends. Nano goals are one of those little steps with big impact. The Nano goal is a goal that you can do in an instant. You typically do it right away – it’s so small that your head trashing fear talk can’t stop you! There’s no resistance. If I said, “I want you to form a new habit of deep breathing. I want you to deep breathe for an hour a day.” It’s just not going to happen. But if I said, “I want you to deep breathe right now for 30 seconds,” or “one minute,” you could do that. You have 30 seconds. And so, it feels instant, and it’s something you can do right away and it’s done.

Why is this important? This is so important because success builds momentum. It’s like a big boulder at the top of a mountain. The Nano goals are the things that start that big boulder moving down the hill. It’s that little push that gets the boulder to start to move down the hill. You know what happens when that thing starts to move down the hill. It gains a lot of steam, a lot of momentum. You need that to win. It will inspire you to more and more action. You break the goal all the way down to the ridiculous, so there’s no resistance or fear.

It’s so fast that the resistance to doing it doesn’t exist. For example, let’s say you want to start a new exercise program—there’s a lot of resistance to that. If just before you’re going to take a shower you say, “I’m going to exercise right now for 60 seconds just one minute. I’m going to jog in place. I’m going to do some push-ups” – you can do that. You have that amount of time. It got so small that it can be done instantly, starting the success cycle of done.

I can’t be stopped by My Brain, Fear or Lack of Time!

Let’s return to the calling customer example. Let’s say you have the goal to call 3 customers today. The Nano goal might be to look up the phone number of the first person you’re going to call. I’m not saying you’re going to do the call. See, when you say, “I’m going to make the call,” then “I haven’t got enough time” – head trash comes in. A Nano goal gets it so small, that all the head trash goes away. Typically, I’ll go back to the last customer that ordered, because they just ordered, and they’re the happiest, and they just purchased the products. I’ll just look up that person. It only takes me a few seconds to go into the database and look up who ordered last and how much they ordered, or I’ll look for someone that ordered big. Literally, I can do that in less than a minute, I can’t be stopped by my brain, by fear, or by the lack of time. Time and fear are going to try to stop you, but you can’t be stopped when you set the Nano goals. After looking up the number sometimes I will make the call right then or set the time for that call now that I have the number right in front of me. It pulls me into doing more.

Done is the Engine of More. Chunk your projects and goals down to things you can do in just one day. Then build momentum by getting into action with Nano goals. You will get to Done faster which gets you to More which leads you to Happy.

All the best – until next time – wytayba – now take control and make it a great day!

Blaine Oelkers is a lifetime entrepreneur, a graduate of Purdue University and Stanford University’s Entrepreneurship program. He’s achieved over 100 Million dollars in sales and coached 1000’s of people. He’s currently the Chief Results Officer for many organizations as well as the President/Founder of a company called Selfluence. He helps business owners and their organizations achieve essentials results using the unique concept of a “Super Results Day”. He can be reached at blaine@selfluence.com.

Blaine is America’s Chief Results Officer® and the world’s greatest creator of doneness. He knows your results matter and he can help you get better, faster and more long-lasting results. Get started with one simple and elegant results technique that activates your mind with your top goal over 100 times a day. He explains it in a short TEDx talk he did which has been viewed by over 120,000 people! Your results matter – get access immediately at www.BlaineTEDx.com